The  common dolphin is the name given to two species (and possibly a third) of dolphin making up the genus  Delphinus .

Prior to the mid-1990s, most taxonomists only recognised one species in this genus, the common dolphin  Delphinus delphis.

The common dolphin is not the dolphin of popular imagination despite its name; that distinction belongs to the bottlenose dolphin due to its widespread use in marine parks and its appearance in the television series Flipper. However, this dolphin was the most frequently represented in the art and literature of ancient Greece and Rome. 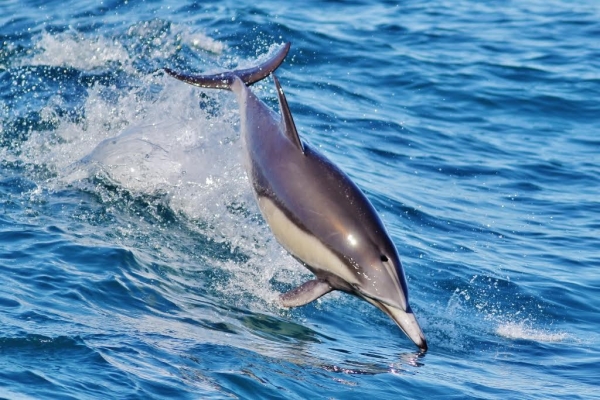 Both common dolphin species are medium sized dolphins. Adults range between 1.9 and 2.5 metres (6.2 and 8.2 ft), long, and can weigh between 80 and 235 kilograms (180 and 520 lb), although a range between 80 and 150 kilograms (180 and 330 lb) is more common. Males are generally longer and heavier. The color pattern on the body is unusual. The back is dark and the belly is white, while on each side is an hourglass pattern colored light grey, yellow or gold in front and dirty grey in back. They have long, thin rostrums with up to 50–60 small, sharp, interlocking teeth on each side of each jaw.

The Common Dolphin are frequently sighted in the Channel Islands National Park and home to variety of sea life.

Type of Wildlife in the Channel Islands Region

There are several different species of whales that could be encountered on one of your trips. California Gray Whales, Humpback Whales, Blue Whales, Finback Whales and Orca Whales (Killer Whales) are common sightings in the waters surrounding the Channel Islands. Additional wildlife includes seals, sea lions, dolphins and a rich variety of bird life; some of which are endangered and protected.

The killer whale (Orcinus orca), commonly referred to as the orca whale or orca
Read More

The humpback whale (Megaptera novaeangliae) is a species of baleen whale.
Read More

The gray whale, Eschrichtius robustus, is a baleen whale that migrates between feeding.
Read More

The common dolphin is the name given to two species (and possibly a third) of dolphin .
Read More